The 1940s was the decade of the Second World War. We were either in the midst of the bloodiest conflict in history, or living with its aftermath. The War ended in 1945, but it had a profound impact on fashion, and this lasted until the end of the decade.

The 40s are often seen as a depressing time, but it was also a period when people needed to let their hair down. Not knowing what tomorrow would bring, they needed entertainment. It was the era of the big band. 1940s fashion is synonymous with Glen Miller and the golden age of swing.

Uniforms and patriotism were major influences on 1940s fashion. Servicemen in uniform, and women in the auxiliary services could be seen everywhere. Civilian clothing adopted military styles. For women, 40s fashion was simplified and understated.

Skirts were short and straight. Jackets were also short, had padded shoulders and a boxy look. In high fashion, styles were similarly restrained. Civilian men’s fashions were even less flamboyant. Typically, they had work clothes, a suit for special occasions, and ‘old clothes’ for leisure-time.

There was an acute shortage of clothing materials. Wool production was prioritised for manufacturing military uniforms. Imported fabrics, like all imported goods, were scarce. The British Government responded by introducing rationing. The average civilian would be lucky to have more than one new outfit per year. People were encouraged to ‘make do and mend.’ Many of the clothes worn in the 1940s were recycled and restyled, having originally been made in the previous decade.

The Government also introduced the Utility Scheme. Clothing manufacturers were forbidden from unnecessarily embellishing garments. The numbers of buttons and pockets were limited. And, additional stitching, tucks and pleats were rendered unlawful. Clothing that complied would carry the famous CC41 label, which stood for Civilian Clothing 1941.

At the end of the War, change was slow. Demobilised servicemen were issued with the famous demob suit. And, rationing continued well into the next decade. There was a hint of change in 1947. Christian Dior launched his ‘New Look.’ High fashion had finally turned its back on padded shoulders. Instead, designers wanted to see feminine curves. Eventually, mainstream fashion would follow.

It’s easy to regard 40s fashion as a ‘lost decade.’ On the contrary, the 40s produced one of the most iconic looks of the last century. As it’s often said, necessity is the mother of invention. The 40s was the decade that saw some of the most inventive trends.

1950s fashion was stylish and distinctive and had a big impact on the way that people think about fashion today. During the 1950s many people broke away from the conservative way of dressing that had been common during the 1930s and 1940s and began to see fashion as a way of expressing themselves.

This was the era in which the bikini was invented, and many 1950s fashion items tended to be colourful and fun. Colourful accessories such as jewellery, bags, sunglasses and hats also became popular during this era. Many people started to create or customise their own clothing, broadening the conventions of what was acceptable to be worn on various different types of occasions.

50s fashion for women was aimed at recapturing the feminine image of women that was lost during the war years. Women’s fashion at the start of the 1950s focused on stiletto heeled shoes, clothes with soft shoulders, long, full billowing skirts and gloves.

Christian Dior was a particularly prominent designer for women during the 1950s. He introduced the hourglass figure to 1950s fashion for women, designing clothing that emphasised the bust and was gathered tightly at the waist. Because the hourglass figure was not the natural shape for women, the 1950s also saw the reappearance of the corset, which was typically worn underneath women’s clothing to help create the desired shape.

At the start of the 1950s men’s fashion was still rather conservative, and suits were often worn both in the office and when socialising. Grey suits were particularly fashionable during this era, while hats became gradually less and less popular during the 1950s. However, films such as Rebel Without A Cause captured the imagination of the public during the 1950s, and casual clothing such as blue denim jeans, chequered shirts and white t-shirts became increasingly more popular.

Much of 50s fashion was influenced by the music of the day. This is true of the Teddy Boy look, which was commonly associated with men but also adopted by many women. The type of clothing favoured by Teddy Boys was classed as neo-Edwardian and had a dangerous edge to it.

Rock music was becoming increasingly popular during the 1950s, and this also had an impact on the fashion of the day. Teenagers in particular started to dress more casually, favouring clothing that allowed them to move and dance more freely. 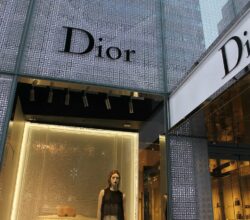 Just as today’s music is a product of past influences so too is fashion. Here are seven of the 1950s fashion designers still influencing …