These days it’s quite normal to find many different dress styles in the same decade. Vintage dresses are fairly commonplace today.. The 1940s were less complicated, at least from a fashion point of view, and dresses followed one of two main styles. Until 1947, they were influenced by the profoundly harsh events of the day.

World War Two made fabrics scarce, and 40s dresses had to be practical. But, women didn’t give up on looking attractive, they just made-do with what they’d got. During and after 1947, things finally started to change. Christian Dior launched the ‘New Look’ in Paris, pioneering an entirely different design ethos. The two styles couldn’t have been more contrasting, and that’s what makes it such a fascinating decade.

A lady, who was a teenager in the 40s, remembers having a dress made from her father’s old trousers. How would that dress have looked? Like most 1940s dresses, it would’ve been fairly short, about knee length. It would also be quite straight and narrow. There may have been a modest number of buttons, if there were any going spare. The shoulders would certainly be padded, but there would be no fancy stitching or pleats.

Somehow, women managed to look glamorous. They might have been working in a munitions factory, or doing agricultural work, but they never let their standards slip. Collectively, women of the 40s created one of the most memourable looks of the last century. If you want to share their style today, you could start by looking for an old pair of trousers. Alternatively, go online to ModCloth. You’ll find a wide range of retro clothing, including 1940s dresses. Whatever you find, don’t forget to accessorise. Women were very inventive, they paid particular attention to their hair, and hats were a big thing.

Today, it’s hard to imagine the impact Dior had when he launched his ‘New Look.’ The War was over, but times were still hard. In Britain, rationing didn’t end until 1952. So, when Dior launched his collection in 1947, conditions were much the same as they had been for years. But, Dior began a fashion revolution, and it took place in women’s minds and aspirations. Using what they could, they tried to emulate his signature shapes. 40s dresses and skirts became longer, around the mid-calf. They also became fuller, using more material. Waists were smaller, and busts more emphasised. It was a complete turn-around from the styles of wartime, and Dior’s influence would last well into the 1950s.

On a final note, the lady with the trouser dress made her own Dior dress, and wore it on her 16th birthday.

The 1950s was a decade of change. 1950 still felt like the 40s, but 1959 was looking more like the 60s. It’s also the decade when Britain got a new Queen, and she was young and beautiful. For the first time ever, there was a monarch that young women could aspire to look like. Millions watched the first televised Coronation, and they admired Norman Hartnell’s design, the apogee of 50s dresses.

The biggest change was in the fashion market, and this drove changes in style. Until the 50s, the most cutting-edge designs were for women in their thirties or forties. These were the ladies with money to spend. Typically, they were married and had children. There was an air of maturity about the fashion industry. Compared to the UK, change happened much earlier in the US. Youth culture emerged, creating new idioms in music, clothing and speech.

Back in the UK, rationing persisted until 1952, and post-war austerity measures held things back. The British Government encouraged export, and the British people had to wait patiently. After the middle of the decade, things were starting to look different.

We can see all this in the styles of 1950s dresses. At the dawn of the decade, Dior’s ‘New Look’ was still the key aspiration for young women. Many made their own interpretation. Compared to earlier styles, dresses were longer and fuller. Waists were smaller, and busts were bigger. Shoulder pads were gone, and the silhouette was far more feminine. It was a very glamorous look. Necklines became lower, and evening dresses were often strapless.

From the middle of the decade, we see another iconic 50s dress style, the shift dress. It began with a style called the sack dress. This was later refined by a new designer, Mary Quant. Other designers, like Chanel, were also moving away from pinched waists.

At the same time, there was now an alternative silhouette. Long, slim-fitting dresses restored glamour, and made later 50s dresses sexier. Picture a young Marilyn Monroe, compare that to her iconic heyday, and you have the 1950s in a nutshell.

Forward looking designers were well-aware of the potential for mass-produced clothes. Before the 50s, ready-made garments carried a stigma. Now, they were desirable and affordable. We shouldn’t forget the influence of Marks and Spencer. They weren’t cheap, but they were good value. The knitted sweater-dress was a very popular 50s style, typically bought from M&S. 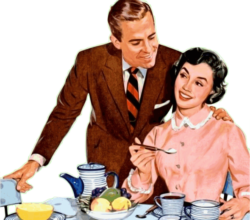 The 1940s was the decade of the Second World War. We were either in the midst of the bloodiest conflict in history, or living …