Although rationing persisted in the UK well into the 1950’s the mass market clothing industry was one of the first to take advantage of the relaxation of austerities. The fashion trends in the 1950s reflected a transition from the rigidity and control of the 1940s toward the youth movements associated with the 1960s.

The 1950s were known as a glamourous decade in British fashions, taking advantage of premier designs and using fine materials readily available following the war, such as English worsted materials, Scottish tweeds, and high quality wool from France.

In women’s fashions, the 1950s exhibited two primary silhouettes: the full skirt, and the slim pencil skirt; both emphasized a narrow waist. Marks & Spencer emerged as the most popular retailer of ready to wear clothing; their profitability quadrupled during the 1950s. The sweater dress, with neckline variations such as a crew, shirt tab, or cowl neckline, was introduced by Marks & Spencer in the late 1950s and remains a popular style even today.

Inspired by Chanel, the ladies boxy classic suit was widely copied by many mass market clothing producers and proved to be very popular; it was often made with highly textured nubby tweed fabrics. Another designer knockoff, the H-line from Dior was widely reproduced. This slender tunic suit with a dropped waist and a slim skirt became one of the defining fashion looks of the 1950s.

Another popular look in women’s fashions was the trapeze dress; it was a swingy dress which was almost triangular and was often worn with low-heeled shoes. The double-breasted slim shirtwaist dress was also popular, especially in wool suiting fabric and sporting detachable white collar and cuffs.

The 1950s saw the introduction of the new fabrics, nylon and polyester. These fabrics were most often used in women’s trousers and ski wear. Faux suede was introduced and became a popular fabric choice for use in jackets.

The 1950s were the first time that the teenager emerged as a separate market due to the influences of magazines, television, film, and rock music. Clothing manufacturers and retailers rushed to offer clothing created especially for teens to take advantage of this newly-discovered market.

Shoe styles in the 1950s ranged from high heels with round or peep toes to kitten heels and stiletto heels later in the decade. Strappy sandals were also a popular footwear style.

Never before or since has it been chic for women, young and old alike, to pair flaming red lipsticks with the mandatory pink the 1950s demanded. The truth is, it worked then in ways that leave many to wonder why the decade known as the 50’s can’t successfully be replicated into contemporary times. In a way, that’s a good thing. Even if the familiar poodle skirts once again became “must have” for every woman under the age of twenty-five, there would always be something amiss. Perhaps it was the atmosphere of a post-war world, the players who brought this decade alive and those who were on the horizon of ringing out those incredible years while bringing in the unsettled 1960s, which would also bring in yet another declaration of war throughout the world.

The 1950s ready to wear ensembles included flowery patterns with the one common denominator being “big” while women’s waist sizes were anything but. The aforementioned poodle skirts, tight-fitting sweaters and pony-tails were must-haves among teens, along with those ever-familiar crisp, white bobby socks. Never before has “girlish”, “innocent” and “mischievous” worked so well together.

Teen boys became rebellious across the U.K. and in America once Elvis Presley burst onto the scene, donning leather coats, slicked back hair and what are referred to today as “biker boots”. Of course, all this leather would have missed its mark had denim jeans not been a part of the look. White tees were in high demand, no doubt.

This was the decade when the Chanel suit was introduced, complete with a below-the knee slim fitting skirt coupled with the collarless jacket. It was the epitome of 1950s ready to wear. Femininity ruled the day for those career-bound women while their daughters were busy adjusting their flaming lipsticks and sweater sets.

Men’s styles included the classic polo shirts, cardigans (which were worn by teen boys too, provided they were “letter” sweaters), wool suits and lots of narrow stripes and checkered patterns. Penny loafers ruled the day in men’s shoe choices. Traditional khakis and of course, men didn’t leave the house without their hats. Despite the various designs, leaving the house meant donning the hat.

Many still long for the styles that dominated this incredible decade. Vintage and retro clothes remain in high demand and the market is far greater than the available inventory. Still, those who lived in the fifties as teenagers reminisce about those golden days and the great fashions that truly defined the era.

Marks and Spencer has become an important name in the British fashion history. Its beginnings date back to more than a hundred years when it was founded by a Polish immigrant from Minsk, Michael Marks, as a penny bazaar. His slogan being “Don’t ask the price, it’s a penny.”

The second personality, Thomas Spencer, joined in 1894 and by 1901, the company built a warehouse at Derby Street, Manchester, the first one in 145 stores inaugurated by 1915. The company differed from other companies in that they catered to the clients with open displays, browsing and self-selecting their goods instead of keeping them in cabinets by the counter. They sold everything from biscuits and buttons to needles and socks.

It was during the 1950’s that Marks and Spencer decided to move forward with the times and believed in optimism, as it was epitomized by the new Christian Dior collection. Even though rationing continued, it was slowly leaving the country’s old economical system and had shown the people that fashion wasn’t only for the rich but for everyone, therefore Marks and Spencer put a lot of effort into innovation and improved their products. They took a man-made fabric they had produced during the war and created a popular line of dresses inspired in the Dior’s collection.

It was then that Marks and Spencer became the best and most popular chain store clothes in the fifties and by evolving with the times, quadrupled their profits that same year. In 1958, they produced its earliest example of color advertising in Woman Magazine, advertising popular women’s blouses, skirts, dresses and nylon stocking. In 1959, it was the first store that applied their No Smoking in-store policy. Their success lies in offering new styles, elegance and good value for their clients’ money. Nowadays, more than 70% of its clothes are designed by in-house designers and carry their own label. Since then, the company has dedicated itself to give the best quality and offering fair value for money and is now the largest clothing retailer in the UK, with more than 800 stores in 30 countries.

When we think of 1950’s haute couture, we think elegance, style and femininity. We also think of tailored suits, flowing gowns and sassy cocktail dresses. The 50’s saw an eclectic parade of fashion from the early part of the decade when haute couture still existed to some extent in its intended form, i.e. clothing designed with a particular client in mind, and progressing through to the end of the decade where ready-to-wear fashions began to take over the industry.

Christian Dior came into the 1950’s riding the wave of his popular creation, the New Look, which featured a full skirt, full top emphasizing the bosom, and a very tiny waist. Dior’s love of the female form was evident in his designs. His dresses would feature a full collared top with 3/4 length cuffed sleeves that would become very slender at the waist, and then explode into a full skirt that fell to the middle of the calf.

Toward the mid-1950’s Coco Chanel introduced the Chanel suit featuring a collarless jacket paired with a straight skirt that fell just below the knees. Chanel used features such as contrasting trim around the collar, hems and pockets of her suits as well as a single button-front closure. Paired with pearls and gloves, this was a classic look that caught on quickly. Chanel was one of the first designers to offer her designs ready-to-wear, meaning that they were no longer one-of-a-kind creations.

Herbert Givenchy is another designer worth noting in the 1950’s for his haute couture. He is probably most recognized for his designs being worn and modeled by Audrey Hepburn. Givenchy’s designs were also very flattering to the female form, with strapless or sleeveless bodices, cinched waists and slim skirts. However, one of his most famous creations, the sack dress, was completely opposite from the form-fitting creations of the day. The sack dress had no waist and hung loosely from the shoulders down.

Toward the end of the 1950’s, hemlines began to get shorter and synthetic fabrics began to make their way into fashion. The elegance of haute couture, however, never waned. 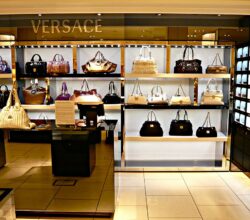 Here are 12 more famous fashion designers from the late 20th Century. You’ll find many more in our other posts here and here. Ralph …