Home
The Sixties
Britain’s Mods of the 1960s

Britain’s Mods of the 1960s were a reaction to the austerity that lingered on in the post war era. The style began in London and spread throught the UK.

England in the 1950s was a pretty drab place to be. Still in the shadow of the Second World War and rationing, utility and conformity were the watchwords in everything from politics, culture and fashion.

During the early 1960s the Mods reacted against this. Inspired by the Beat generation in America, the French existentialists, and British Teddy Boys, young willful Londoners, rebelling against the drab austerity of the era, embraced change, accepted the new way of the world and plunged headlong into the radical social changes that would come as the fifties turned into the sixties. Most importantly, they did it looking incredibly stylish.

Mod clothing reflected the new machine age. Mods of the 1960s dressed in t clothes that had clean, straight lines. They were often made from synthetic fabrics and featured bold geometric designs. Men sported slim-cut suits with narrow lapels, often imported from Italy, which was judged to have the best tailors, with button-down shirts, skinny ties and, occasionally, a cashmere sweater.

For both boys and girls, hair was assiduously styled, with bobs for the females and sculpted, razor-cut mop tops for the males. A comb rather than a handkerchief in the top pocket of a blazer was not an uncommon site.

After a night jiving to jazz at the all-night coffee shop, or to the sounds of one of the new Beat groups that grew up out of the mod scene around London’s Carnaby Street, mods would don parka jackets to cruise home on their scooters, the preferred mode of transport because the clean lines fit the mod aesthetic and their concealed parts made an oil stain on a suit trouser leg less likely.

Mod clothing was also a deliberate antagonism to the mods’ arch nemeses, the Rockers. With their hulking motorcycles and retro uniform for the time of denims and leathers, the rockers were seen as reactionary, harking back to the past, and poorly dressed to boot.

Of course, mod clothing has itself become a retro fashion today. But those who follow it still seek to retain some of the mods’ original sense of style combined with rebellion. 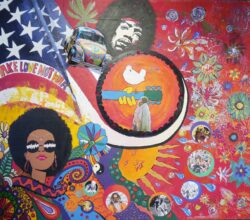 1960s fashion remains as vivid today as it was when it first appeared. The 1960s was the decade in which strong currents of change …